The time has come for me to show off my puzzle collection. I’m always postponing this because the collection is always “incomplete”. I know, I know… It will never be complete! There’s no such a thing! So I guess this time is as good as any ;D

I’ve been taking pictures of my puzzles for over 3 years now, basically since I started cubing. I usually take two pictures of each puzzle, one solved and one scrambled, both in random locations. Until now, only my facebook friends could see them. I guess the world can finally be in peace now that I decided to share this with the whole internets hehe 😛

I’ll keep updating this page with new puzzles as I get them. I tried to divide them into categories, so they are not necessarily grouped in the order I acquired them 😉

The puzzle which got me into all this was this one. A 3x3x3 Rubik’s speed cube from the official Rubik’s brand. I bought it with the intention of solving it on my own, taking notes and all. But the cube came with instructions for the layer-by-layer (LBL) method! Until then I didn’t know of the existence of algorithms to solve these puzzles. Needless to say, I ended up never opening a notebook to develop my own solution and just memorized the 7 steps to solve it.

Instead of spending time trying to solve the cube on my own, I wanted to figure out ways to extrapolate the LBL method to cubes of different sizes. And thus I added cubes with 2, 4, 5, 6 and 7 cubies per dimension to my collection. I particularly enjoy solving the 7x7x7, it takes just the right time to entertain me 🙂 I’m always looking for higher order cubes, but I think anything bigger is not being mass produced yet. 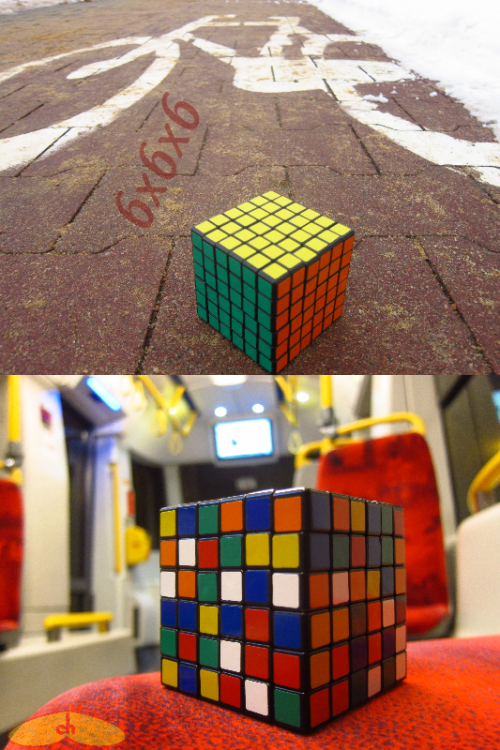 I also got some 3x3x3 speed cubes f rom other brands to try and find a cube which I’m comfortable with. The green Cube4You was good for me for a long time. Years later I got the pink DaYan GuHong, which is my main speed cube at the moment.

These are not speed cubes, they’re cheap versions of the Rubik’s cube. They only differ by stickers and size. I don’t usually buy these, I got most as presents or as freebies. It’s so easy to find personalized cheap cubes that I don’t even bother, but I for sure welcome them as gifts 😉 I really enjoy the sudoku cube though, it’s amazing how by just changing the stickers, a puzzle can get much more interesting.

Designed and 3D printed by me 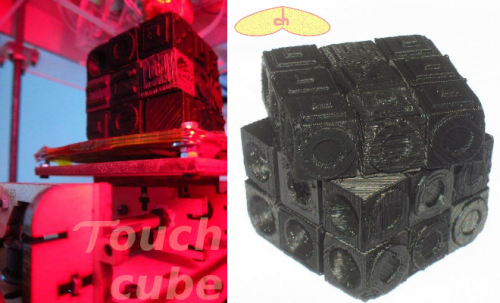 Mirror blocks was one of my first puzzles. It’s mechanism is the same as the Rubik’s cube’s, but instead of colored stickers, it s pieces are identified by their sizes. A bit tricky at first, but after a while it all makes sense 😉

The void cube is one of those awesome designs that you look at and think “how is it possible?!”. It’s also a bit harder to solve than the normal cube because the center pieces are not there to guide you… I must confess I’ve never really bothered to learn how to solve it until the end, when I do solve it, it’s by luck ;P

The 3x3x3 ball is just like a cheap Rubik’s cube, but all the pieces are rounded so it looks like a ball.

The Rubik’s bank is pretty cool, you can put coins inside it and the only way to take them out is if you’ve solved one of the layers. It has an interesting mechanism to allow all this to happen.

Lumina cubic is an electronic puzzle. A few different games can be played in it, including a usual Rubik’s cube kind of puzzle, where you turn its faces by pressing buttons.

The Gear cube is another amazing design. It’s close to a Rubik’s cube, but with gears between pieces which makes them rotate in cool ways. 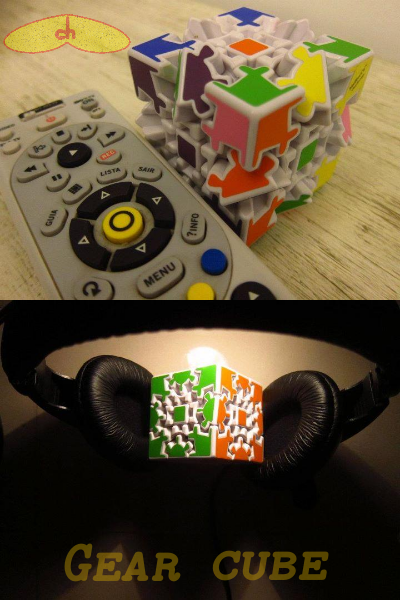 The Latch cube is another tricky one. The arrows on its edges limit the directions in which it can be turned, and if opposing arrows are on the same face, it gets locked. I’ve solved it a couple of times following instructions…

This Siamese cube is a little mod of mine. I got two small cubes from a Japanese gacha-gacha machine (which turn surprisingly well) and glued some of their cubies to make it. Pretty tricky to solve since many movements get constrained. 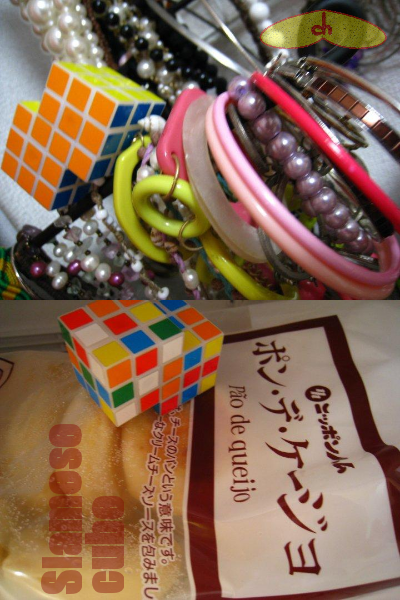 The pyraminx was one of my very first puzzles. It’s not so hard to solve, but a necessary item in any collection. 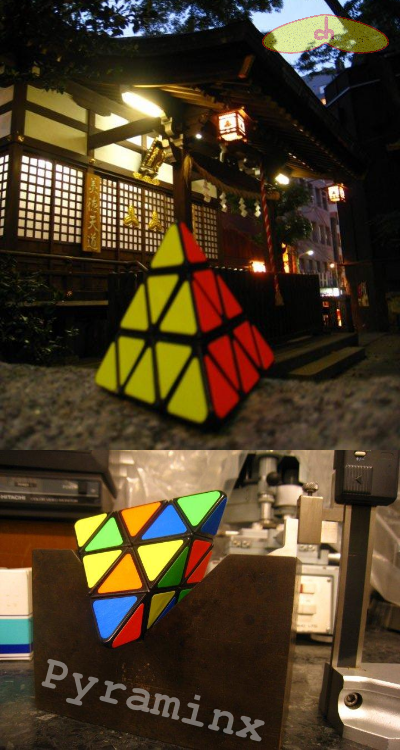 Square-1 is a shape-shifting cube puzzle. It’s pretty famous, people memorize algorithms and compete for world records like for the Rubik’s cube. I used to be able to solve it, already forgot it though… 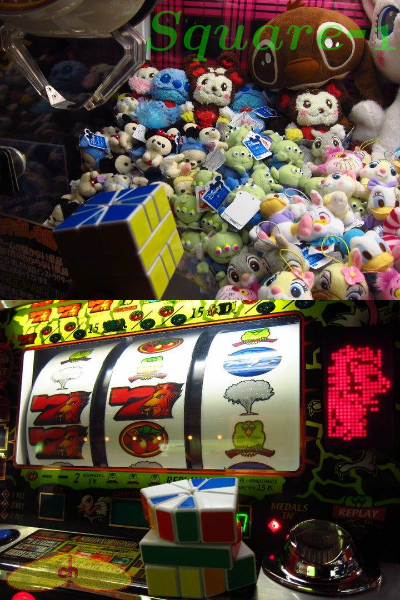 Skewb is another cube puzzle with crazy cuts. If you’re used to the Rubik’s cube, this puzzle’s faces will rotate in non-intuitive ways at first. I used to be able to solve it in half the time I solve the Rubik’s cube, but I haven’t practiced in a long time…

The flashlight/key chain 1x1x3 is not a big challenge, but definitely a nice item for the collection 🙂

There are 2 types of 1x3x3 commercially available. The Floppy cube never changes its shape, while the Scramble cube can take several shapes. I like the scramble more, even though it’s easier to solve, because the different shapes look cool and you get baffled for a second until you realize how the pieces are still holding to each other. 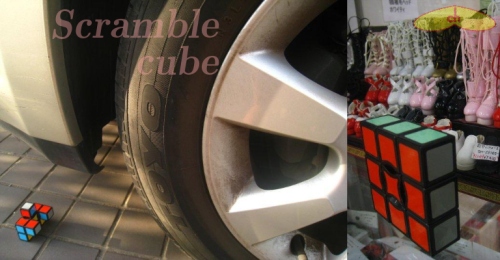 The 2x2x3 is called the Tower cube. Doesn’t shape-shift… But the 2x2x4, confusingly named Rubik’s tower, shape-shifts! Some cool stuff can come out of it 🙂

I have a lot of fun with the 3x3x7. It’s cubic, but with the top and bottom layers sliced up, pretty neat!

Oh the Crazy 2x3x3! What a difficult puzzle! The outer square and the inner circle get scrambled separately. There’s one corner which holds the inner circle, its pretty confusing. I’ve only solved it by following instructions online…

This is basically a 3x3x3 Rubik’s cube cut in an octahedron shape. I solve it with LBL, but sometimes there are parity issues, since some pieces fit in more than one orientation. 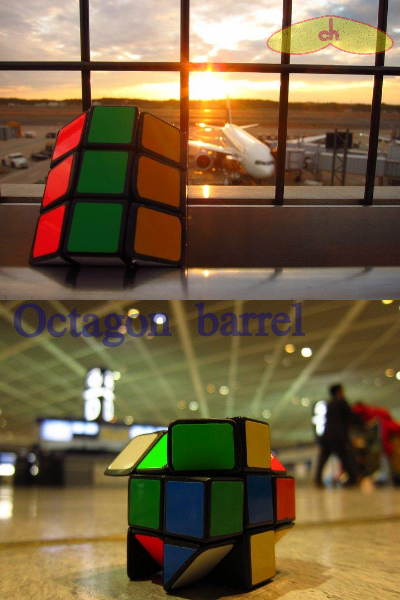 The Megaminx is the most basic twisty puzzle with 12 faces. At first it might not appear so, but its mechanism is the same as the Rubik’s cube’s, but with double the number of faces. In fact, I solve it with pretty much the same algorithms as for the normal cube. Tons of fun!

Ball.B is for the megaminx what the 3x3x3 ball is for the Rubik’s cube – simply a rounded version. What’s interesting about this one though is that it has only 6 colors, which give rise to parity issues if pieces with the same colors get swapped. 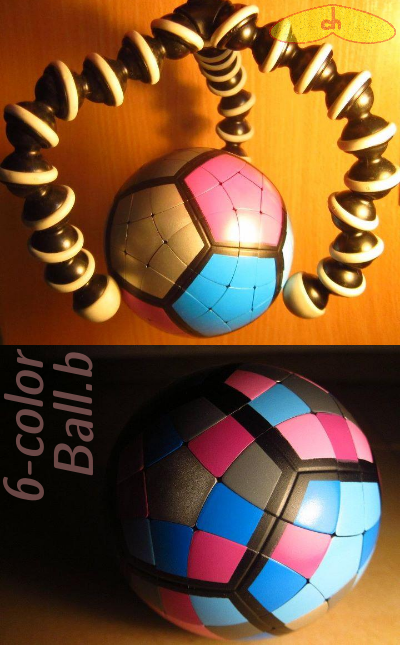 Teraminx, the god of all puzzles! As far as i know, this is the biggest mass produced twisty puzzle. It’s an expansion of the megaminx, from 3 cubies per edge to 7! It’s not that hard to solve it, it just takes time to find all the pieces you’re looking for :O

Skewb ultimate, an extrapolated version of the skewb above. Similar solution, totally fun!

I’ve run into this kind of puzzle at souvenir and crafts stores several times. The puzzle is simple to solve and easy to build. I’ve never seen one with an order higher than 4, that would be cool!

The Rubik’s snake reminds me of the snake puzzles, with slanted pieces instead of little cubies, and in the end forming a “ball” shape instead of a cube. Rubik’s twist is exactly the same puzzle, but with a different color scheme, I still don’t know what’s the point. 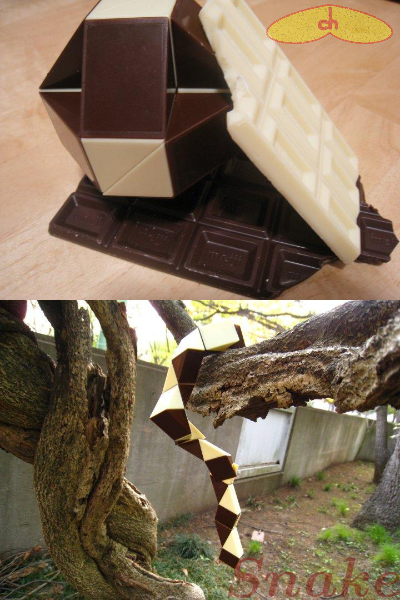 Designed and 3D printed by me

I wanted to print my own snake cubes with tiny cubies, and these are what came out. One day I’ll be printing a 5x5x5 version!

The Tetris cube looks like a Rubik’s cube, but it’s actually made of several tetris-shaped pieces which fit together. There are many ways to put the pieces together as a cube, but only one has each face with one color. 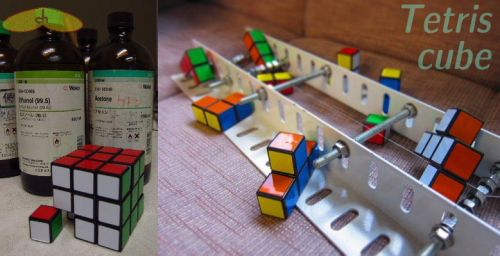 I got the Rubik’s magic just to have it in the collection. Solved it a few times by trial and error but never bothered to look up proper solutions… 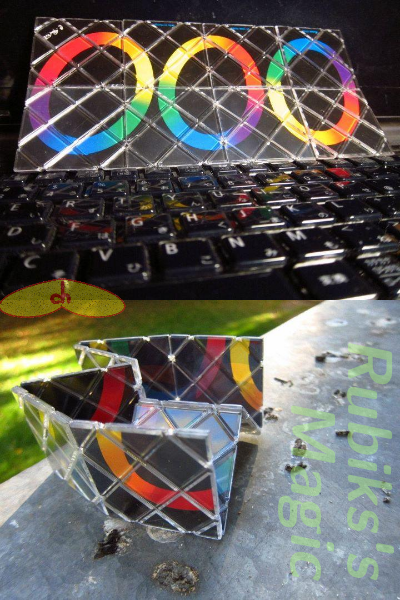 The triamid is a very interesting puzzle because it’s not self-contained. The “moves” you can do on it require taking pieces off and reattaching them in different positions. Not that hard to come up with a way to solve it though 😉

Magcube is a 6x6x6 cube consisting of lots of tiny magnet balls. More like a decoration than a puzzle, there are lots of cute shapes you can make with it. (Also known as Neo cube) 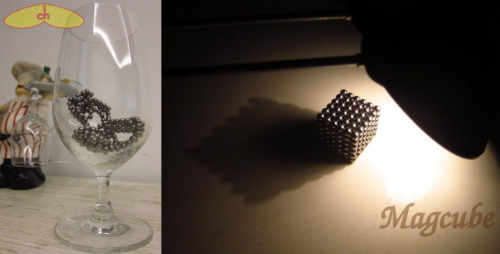 I have fun with the cromoball, its faces turn and the center pieces move in belts around the whole ball. Easy and fun! 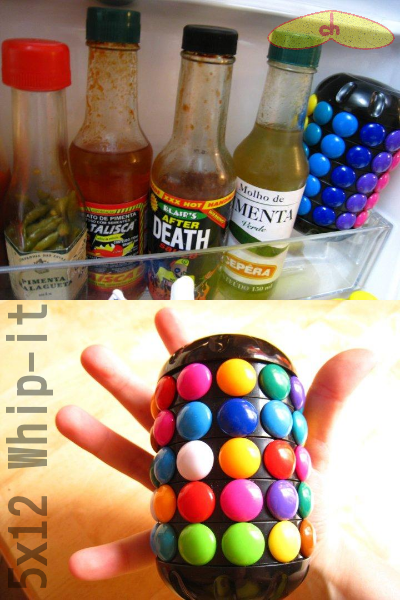 Dual Circle is composed of 2 interlaced circles, and when you rotate one about the other, they both get scrambled. It’s easy to solve it by repeating the same action over and over though hehe… 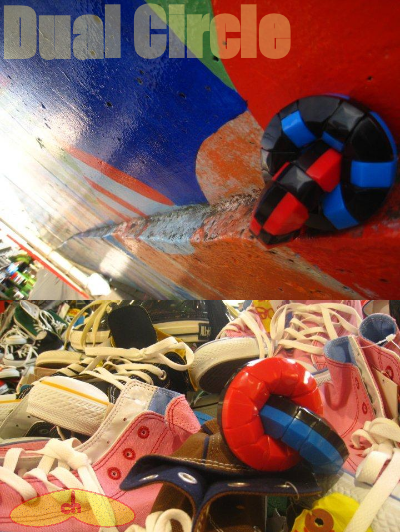 56. Hedgehog in the cage

I don’t usually buy this kind of puzzle where you gotta separate the pieces, but this one has a story. Apparently the hedgehog in the cage is a very popular puzzle in the Czech Republic because it shows up in a famous book. As you can see, my sightseeing map of Prague mentioned it, or better, a drawing of it. So I had to get it! 🙂

The next 3 puzzles are of the kind that you pull all pieces apart, and have a hard time putting them back together again. I get random puzzles when I can’t find a twisty puzzle and I’m itching to get a new item for my collection 😛 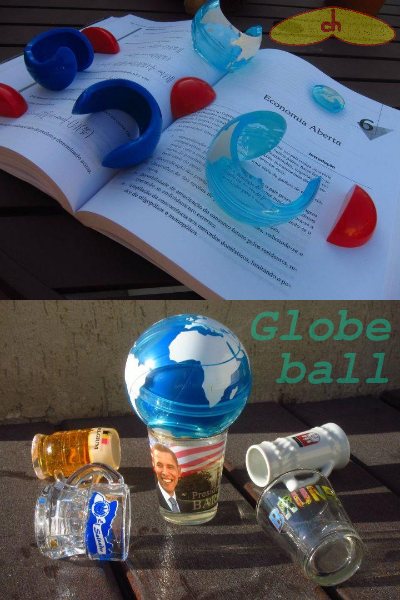 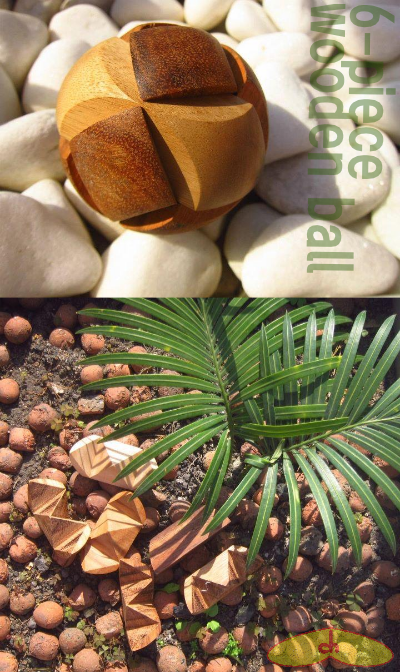 Stay tuned for more puzzles! (I actually have a few puzzles here without pictures yet :P)